One of the many nice things about beekeeping is that it is a great conversation starter. The question "so whats your job?" generally leads to a flurry of questions about bees, stings, honey and the like. When I explain to people that most of the honey we produce is Certified Organic the response is often mild scepticism that something such as honey could be claimed to be organic. I don't blame people. A bee can fly 3km to a food source, and she will forage on any flowering plant within that range, not just the plants that have been raised organically. However, in some parts of the world it is possible. There are several important things to understand about producing organic food. To be certified the producer must adhere to strict standards and be verified by an independent verifier. Here in New Zealand,  we have two verification agencies: Biogro and Asurequality. Both have the same rigid standards for producers. These standards are generally applied internationally if there is agreement. In New Zealand, we are audited to the UK Soil Association organic standard. This has general international acceptance. Click here to see the New Zealand Organic Honey Standard.

The organic standard dictates how we run our beehives. It is much more complex than simply eschewing synthetic chemicals. Beehives must be sited in areas of "primarily spontaneous vegetation". This is defined as being more than 3km from urban areas, intensive forms of land use, industrial sites, refuse tips, main highways and things like that. Diseases and parasites of the bees must only be treated with organic treatments that are specified in the standard. Fortunately the indiscriminate use of chemicals in beehives is not prevalent in New Zealand. In many parts of the world diseases of brood (the baby bees) are treated with antibiotics. Click here for an example of treating beehives with antibiotics. The most troubling aspect of antibiotic use is that it is used a a prophylactic treatment in all beehives, not as a targeted treatment in a few beehives. This means that honey from North America, South America and Asia can often have traces of (sometimes illegal) harmful antibiotics in it. In our organic beehives, any contagious brood diseases must be controlled by killing the bees and burning the entire bees and beehive. This may seem a much worse alternative to putting a few grams of antibiotic in all of the beehives but it has several major advantages. The main advantage is that destroying one diseased beehive as soon as it is found prevents the disease spreading to other beehives in the beekeeping business. This prevents the need for antibiotic use. Click here for more New Zealand Honey Information. 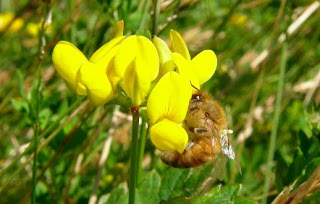 Along with antibiotic residues in honey, the other chemical residues that are most often found are from miticide chemicals. That is because honeybee enemy number one all around the world is the dreaded Varroa mite. The easiest way to control this parasitic mite that sucks the bees' blood (heamolymph) is with miticide chemicals such as fluvalntate, amitraz and coumaphos. If used correctly, there would only be low traces of these residues in honey (except coumaphos, which is highly residual in honey). Unfortunately, commercial beekeepers are busy people who sometimes have more important things to do than follow the instructions on the packet of their miticide chemical. Consequently, it is difficult to find mainstream honeys that do not have residues of miticide chemicals in them. Organic beekeepers are prohibited from using the mainstream chemicals and must use  plant based compounds that are toxic to varroa mites, such as thymol. This is a unique chemical that comes from the wild thyme plant. The problem is that the natural remedies are not as lethal to the varroa mites, so they cost much more on a per beehive basis to control the varroa mites.

Another major issue that prevents a beehive being "organic" and producing organic honey is the practice of feeding sugar syrup to bees. Non organic honey producers routinely remove all of the honey from the beehive, even though this honey is for the bees' to survive the winter. They then replace this honey with sugar syrup, which is not at all natural. Although this does not alter the characteristics of the honey that the consumer eats from the beehive, it is an unnatural practice. As a result, is it prohibited in certified organic beekeeping businesses. This means that we must leave enough on the beehives honey for the winter, which is fair enough, as they produced it! The only problem is that sugar is worth less than 1/4 of the value of honey, so there is a strong economic incentive to do this. This is another reason why genuine certified organic honey is more expensive than non-organic honey. Click here for a summary of organic honey production standards.

Producers of genuine Certified Organic Food must go to a lot of extra effort to ensure that their produce meets a rigorously enforced organic standard. As a consequence of this, the production costs for Certified Organic foods are almost always higher. Don't be fooled by companies that put the word "organic" in the brand or in the name of the product (this seems to be a prevalent problem with honey brands) look for the organic certification. Better for you, better for the planet. 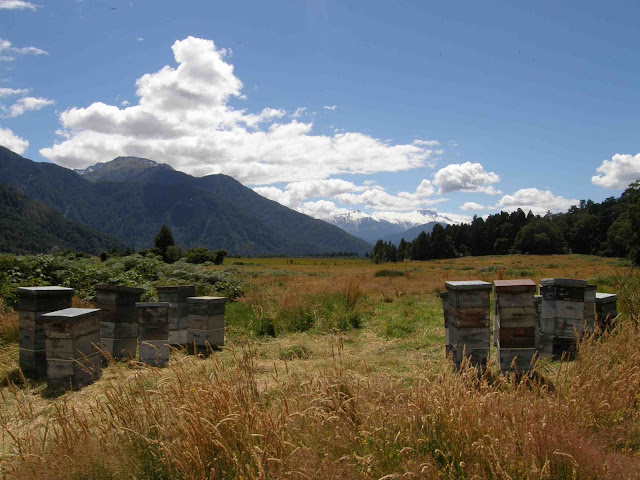 The site of some certified organic beehives in New Zealand. Far from pollutants. Photo: Wildpure
Posted by Reece.
Posted by Wildpure at 4:03 AM